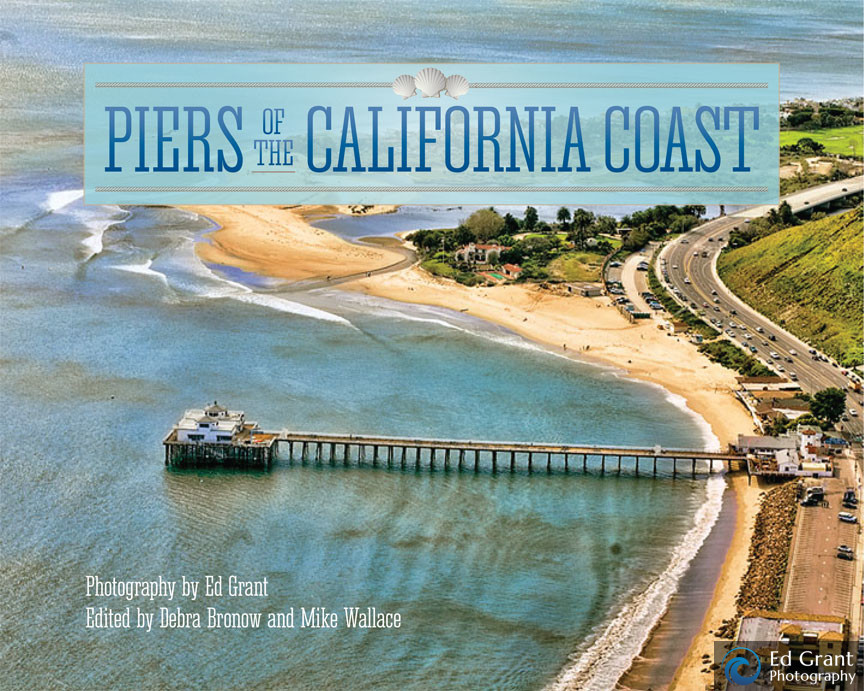 Piers of the California Coast is available at the following locations:

Made in Santa Cruz

Debra Bronow is a writer and consultant to non-profit organizations. Born in California, she grew up near beaches (and sometimes piers) in the South Pacific and Northwestern Alaska, with regular trips back to visit grandparents – and piers – in Southern California. She has been a writer and artist since early childhood. She lives in Southern California, somewhere between the 405 freeway and the beaches of the South Bay, with her husband, two sons, and a standard poodle. She still believes there is no better treat in the world than a Balboa Bar on a hot summer day.

Serge Dedina is the Executive Director of WILDCOAST, an international conservation team that conserves coastal and marine ecosystems and wildlife. His articles and essays on Imperial Beach have been published in the San Diego Union-Tribune, Los Angeles Times, Longboard Magazine, and the Voice of San Diego. He is the author of Saving the Gray Whale, Wild Sea and the forthcoming Surfing the Border. In recognition of his conservation achievements, Serge was awarded the San Diego Zoological Society’s Conservation Medal, the California Coastal Commission’s Coastal Hero Award and the Surf Industry Manufacturer’s Association Environmentalist of the Year Award. Serge grew up in Imperial Beach, worked as an ocean lifeguard there in the 1980s and later as a State of California Lifeguard, and  can still be found surfing by the pier when the waves are good.

Christie Forshey has enjoyed residing in several beach cities- Torrance, Long Beach, Redondo Beach and Santa Barbara. Christie is an educator and writer who enjoys spending time with her husband Jeff and three children, Theo, Nina and Ruby.  Christie earned her Master’s Degree at Pepperdine University and completed her undergraduate work in Creative Writing at CSULB.  She is a published poet.  Christie is great friends with Ed Grant’s daughter, Alisha, who met and became roommates in Long Beach and later reunited in Manhattan Beach!  The beach has brought and kept us together.

Sam George, former senior editor for Surfing magazine and former editor-in-chief of SURFER magazine has written and/or directed a number of acclaimed surfing documentaries, including Riding Giants, Pipeline Masters, The Lost Wave: An African Surf Story, Hollywood Don’t Surf, and The Legend of Eddie Aikau. Sam has written and edited more than half a dozen books on the subject of surfing, including Surfing: A Way Of Life, Surfing, Tom Blake: Surfing 1922-1932, The Perfect Day: 40 Years of SURFER Magazine, Surf Life. SURFER 50, and The Big Juice. A former professional competitor Sam was also one of the pioneers of stand-up paddle surfing and is currently the Senior Editor of SUP Magazine. He still competes in various stand-up paddle surf races, accruing a number

John Hinkle born in Dallas Tx, raised in Houston, a graduate of Stephen F. Austin State University, BA communications, Journalism, 1979. First worked as sports writer for the Baytown Sun, Baytown Texas and spent time surfing nearby Galveston. Moved to the hill country of Austin Texas working as a copy editor for the Austin American Statesman before finally relocating to Los Angeles in 1982 working for the Los Angeles Herald Examiner. A career shift in 1984, joining IATSE Local 729, Hinkle has worked the last 30 years as a scenic artist for motion pictures and television and became a member of the MALIBU SURFING ASSOCIATION in 2005 serving as MSA President since 2012. He has two sons, Austin and Jesse, who grew up surfing the waves of First Point, Malibu.

Cathy and Don Inglesias have lived close to the beach in Santa Cruz since the late 1970s. Don has been surfing for over 50 years and still loves the power and rhythm of the waves. Cathy and Don, along with a core group of Santa Cruz surf families, began the Santa Cruz Woodies Car Club in 1993, at a collective gathering, in their living room.  The car club is still going strong after 20 years. They share their passion for old cars and the beach lifestyle and hope to do so for another 50 years.

Iris King was born and raised in Santa Barbara County. She joined the United States Marine Corps Reserves when she was 17 and served for 8 years. During that time she attended UCSB and became a California State Lifeguard. In 2007 she was offered a permanent Peace Officer position with State Parks and currently works as a Permanent Lifeguard along the Gaviota Coast. In her spare time she enjoys surfing, fishing, diving and gardening.

Larry Krueger is an instructor of Communication Studies courses for over 25 years at local Southern California colleges and universities and has won numerous academic awards.  He lived in Seal Beach for over 30 years and now lives in Belmont Shore.  He is a waterman who loves to surf, fish, and spearfish Baja and the local waters.  Most importantly, he is a husband and father teaching his children to love the sea, learning, and life.

Steve Long is a retired State Park Lifeguard Chief who oversaw lifeguard services at Doheny, San Clemente and San Onofre State Beaches for 30 years.  A life long surfer, he began frequenting the beaches in San Clemente in 1961, raising a family there from 1978 to the present. An armchair historian, he volunteers his time presenting stories and preparing exhibits for the San Onofre Parks Foundation in San Clemente.

Randie Marlow, lifelong resident of coastal California whose photographs have long been favorites of visitors and residents. She is the owner of Images and Digital Design, a full service design and photography business. Images and Digital Design has recently celebrated its11th year in business. Randie’s favorite subjects to shoot range from the wildflowers of Half Moon Bay, to breeding bird colonies of the Devil’s Slide Trail, from boats moored in the fog at Princeton Harbor to newborn harbor seals and migrating whales at Pigeon Point Lighthouse. She can be reached at itsamarlow@gmail.com

Frank Quirarte, photographer extraordinaire and all around waterman. Frank’s work has graced the cover and pages of all the finest surfer publications around the world. His list of accomplishments go well beyond the surf industry; from his service in the military to his heroic actions rescuing survivors in New Orleans, Louisiana after Katrina. Frank always puts safety before his photography. He has probably made more rescues at Mavericks than anyone else! His actions have saved countless lives, including Greg Long out at Cortez Bank.

Mike Wallace has pulled in deep to surf subjects ranging from the origins of the wetsuit to computer-aided surfboard design for various blogs and publications, including Surfpulse, Good Times and the Half Moon Bay Review. Based in Moss Beach, California, Mike has shaped surfboards for several years under the ‘Iconoclast’ label in the never-ending search for the optimal combination of retro outlines and modern bottom contours to give more mature surfers a leg up over their younger rivals. He is also the head coach of the Half Moon Bay High Surf Team and has spent several seasons caravanning up and down the California coast in the lee of the state’s piers coaching his two groms Konrad and Kaira. This has informed his unique perspective on ‘Piers of the California Coast’ as a window into regional surf culture. By trade he is a market strategist for Action Economics and has been posted in Washington, London and Bay Area covering the international financial markets for the past two decades.

Tracey Thomasson is a graphic designer and art director living in Manhattan Beach, CA. She is passionate about good design and considers herself a typography aficionado. Tracey loves the beach lifestyle and has lived within walking distance of the Redondo, Hermosa and Manhattan Beach piers for her entire life..

Stuart Thornton had the good fortune to experience a lot of the California Coast’s finest piers while researching his Moon Coastal California guidebook in 2012.  The Marina based writer got better acquainted with the piers while working with the charismatic Ed Grant on this book. In addition to Moon Coastal California, Stuart is the author of Moon Santa Barbara & The Central Coast and Moon Spotlight Cambria & San Simeon. He also contributes to National Geographic Education, the Monterey County Weekly and Relix Magazine.

Grant Washburn, world-class big wave surfer,  was featured in the Imax film  Adventures in Wild California, and  the award winning surf documentary,  Riding Giants.  He was the Surf Coordinator on Chasing Mavericks, the story of iconic big wave surfer Jay Moriarty.  Washburn co-wrote & edited the large format  book  Inside Maverick’s, Portrait of a Monster Wave.  Washburn is currently competing in the Big Wave World Tour as well as doing the color commentary.