Mavericks: Everest of the Seas

Mavericks: Everest of the Seas was launched in the fall of 2009 with the idea of bringing together the most memorable photos from Mavericks best sessions. Large & enthusiastic crowds have been in attendance from its debut at the Coastal Arts League Gallery. The exhibit has enjoyed successful runs in the San Francisco Museum of Modern Art, California Academy of Sciences, & Longboard Winery in Healdsburg, California.

Mavericks: Everest of the Seas Photography & Art Exhibit returns for the 4th Season. – Half Moon Bay Patch, by Debbie Wong

Mavericks is awe-inspiring & this exhibit is bringing all of that energy into the gallery. The images inspire people, they reach people & they will bring you right into the wave. Tony Canadas, local photographer & Maverick’s surfer, says: ‘Shooting from the jet ski is all about timing. You have to predict where each wave will break & you have to have knowledge of the reef underneath to know exactly where that sweet spot will be, so you can get that one magic shot”. Ed Grant, Curator of the show, adds: “Mavericks is a wonder of the world. It’s everything you’ve heard about & more. The dangers, the rocks, the sharks, the gigantic sets with waves the size of buildings & the deafening sound of it will give you the visual ride of your life. Mavericks surfers make it look easy, but they’re awesome athletes dealing with truly fearsome conditions”.

It’s a modest-sized space, yet this year’s “Mavericks: Everest of the Seas” art exhibit at the gallery in Half Moon Bay has packed in a show of wall-to-wall waves of its hometown break.

Big and splashy photos of Mavericks surfers riding the waves line the edges of the room, along with paintings, video, and pieces of ceramic and fabric art.

In the center of it all lies a smooth and shiny surfboard made of mahogany — perhaps a fitting position for the man credited with being the first to surf the wave located less than a mile past Pillar Point Harbor over 35 years ago.

This is the fourth year in a row that show curator and veteran Mavericks surf photographer Ed Grant has put together the exhibit in conjunction with the Coastal Arts League.

“This year we had a sensational year,” Grant said earlier this week as he reflected upon the show’s six-week run in the gallery.

“We’ve sold more works than any other year before,” he said. “And the opening champagne and wine reception was the first time in my life I remember having a party where everyone showed up.”

“It’s overpowering in the sense that people are in awe of what they see — it’s a phenomenal lineup of photographers,” Grant added.

Taking a tour of the exhibit with [Ed] Grant is similar to sitting alongside a friend while leafing through a family photo album and learning the story behind each snapshot.

“This one here of Ion Banner was printed in the New York Times,” he said, pointing to a photo by Tony Canadas which captured the Half Moon Bay resident at just the moment when Banner was hanging parallel to his surfboard and the face of the wave itself.

“And here’s Jacob Trette out at Mavericks,” he said, pointing to a photo of his own taken in Jan. 2011 on the day when the Southern California surfer on a set of sneaker waves.

Trette’s position at the bottom of that fateful wave was captured by Grant in the photo on display at the exhibit.

“I was standing next to Eric Nelson where we were shooting out at the Air Force Base, and all of a sudden a set came through that was three times the size of the sets that were running that day,” he said. “It caught surfers in the lineup unaware. They couldn’t get out — they were caught in the impact zone.”

Grant said he couldn’t believe what was unfolding before his eyes. But professional kayaker Matt Krican came in and retrieved Trette from the water before photographer Russell Ord swooped in on his jet ski and delivered Trette to safety, he said.

Community artists Carole Brehm, Casey Brehm and Eda Margaret Cook all have works hanging in the exhibit. While Casey Brehm’s ceramic waves are artfully rendered with a hint of Hokusai, Cook’s piece is a vivid wash of bright watercolors depicting the maelstrom-like conditions Mavericks surfers often report finding themselves in when the wave is behaving at its best. Carole Brehm’s series of multi-hued painted swirls on fabric also gives the sense of the powerful yet transcendent nature of the big wave break.

But it’s not just individual works visitors should take notice of, Grant said. Fellow photographer David Evans staged the exhibit and took care to ensure that the entire collection of works hung together well.

“David had the idea of harmonizing the colors of the prints throughout the show,” Grant said. “That was his road map for hanging the gallery.”

With the show set to close on Jan. 26, Grant has already taken on new projects, such as consulting with the Discovery Channel on a series about the ocean.

“They wanted to include Mavericks in the series, so I went out with them on a boat,” he said.

Overall, Grant says, he’s happy with the way the show went this year.

In addition to raising $400 for the at the opening reception, he said, the show’s been more popular than ever this year.

“I think the filming of the movie ” here in Half Moon Bay had a lot to do with it,” he said. “It raised the profile of the contest quite a bit.” 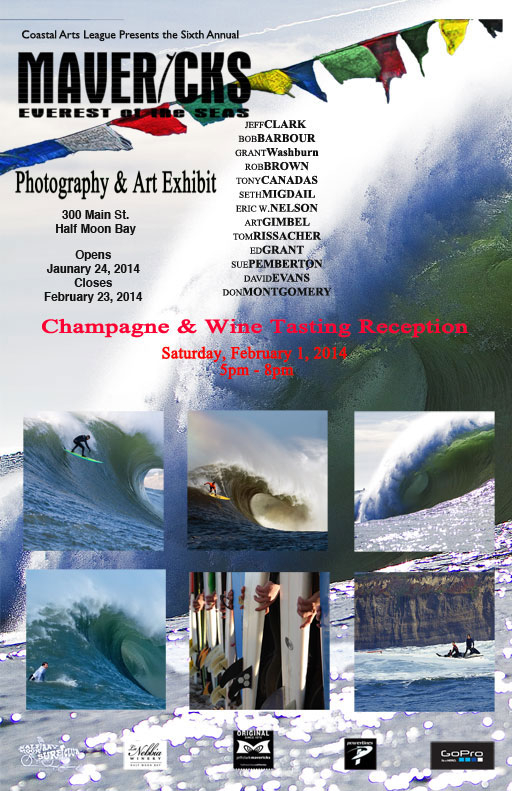 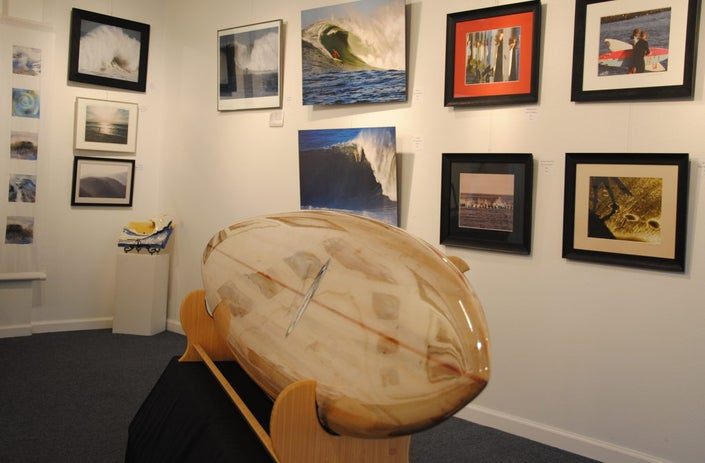